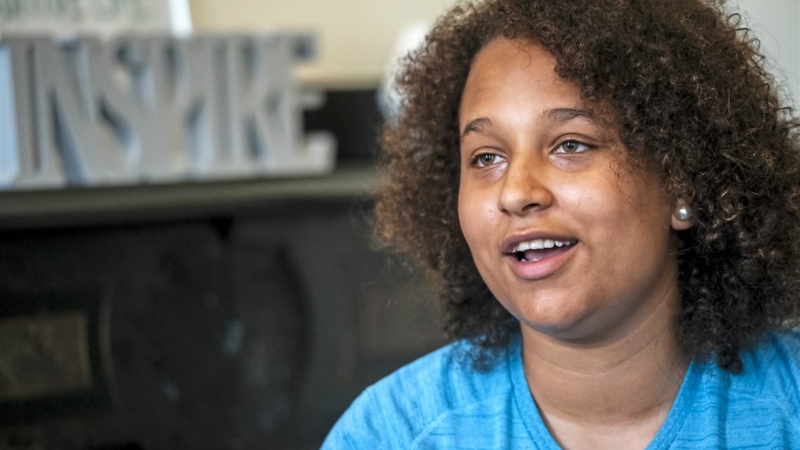 When 17-year-old Alayah Thompson first stepped into the juvenile probation office after getting in trouble for fighting Downtown, she saw a scary-looking probation supervisor and worried she might be going to jail.

But instead, the probation supervisor told her she’d been flagged to participate in a pilot program on the North Side, a diversion program designed to help young, first-time and low-level offenders get rid of or keep criminal charges off their records.

She’d need to take part in the voluntary program for six months, and if she did what she was asked to do — whether attending workshops, counseling or community service — she’d be free and clear at the end.

Alayah, who lives in Spring Hill, thought it’d probably be lame. But six months later, she’s so involved in the diversion program that she plans to keep attending activities even after her juvenile case is closed.

“They showed us there is something more to life than just doing bad stuff,” she said Tuesday. “Even though a probation program isn’t good, [they] make it good.”

She enjoys the program’s field trips and excursions, she said, and was touched when a day earlier a staff member took her job hunting.

“It’s not a punishment coming here, it’s more like a reward,” she said. “Because they really care about you.”

The pilot program, which is limited to the North Side and targets people ages 12 to 26, has since July 2017 been facilitated by Foundation of Hope, a nonprofit on West North Avenue. It so far has seen some early success — of 60 youths who’ve participated, to date only four have committed another offense, program director Jeffrey Williams said. He based that count on follow-up with families, police and probation. 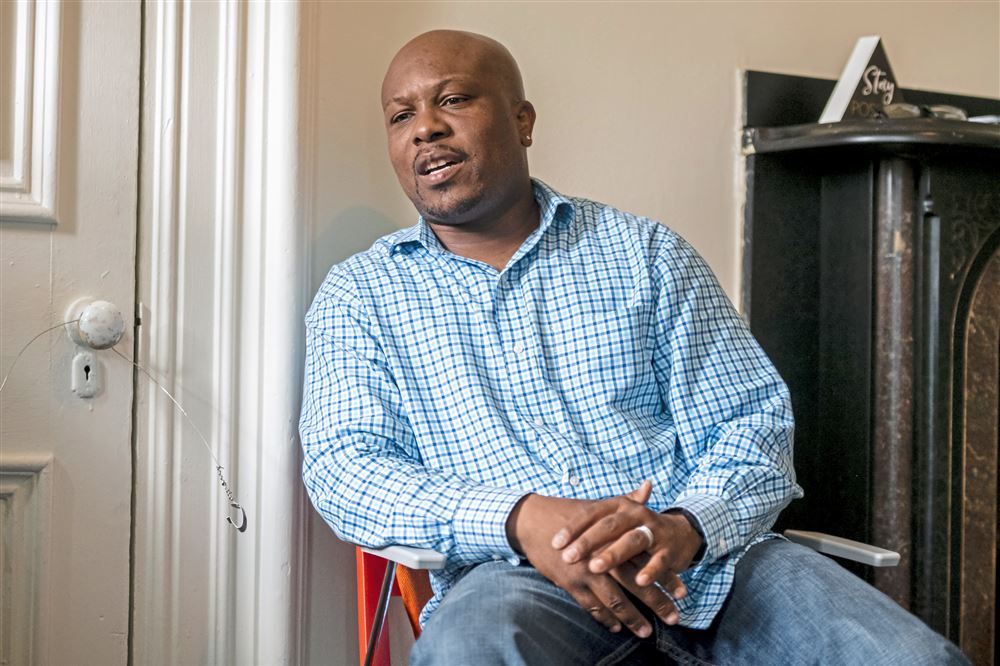 Jeffrey Williams, director of the pilot North Side diversion program facilitated by Foundation of Hope, explains Tuesday, July 17, 2019 how it was developed. (Michael M. Santiago/Post-Gazette)

The program’s small-scale but intensive approach requires collaboration between police, prosecutors, judges, nonprofit workers and probation officers, all of whom are working toward the same goal, said Kimberly Booth, Assistant Chief Probation Officer in Allegheny County.

“We don’t want kids in the system who don’t need to be there,” she said.

Criminal records, even for juveniles, can make it difficult to secure financial aid or jobs later in life, she said. The idea behind the diversion program, Mr. Williams said, is to give young people a “second chance to do the right thing” before they get mired in the criminal justice system.

From July 2017 through July 2019, 93 people were referred to the diversion program, according to an internal report, and 60 agreed to participate. The median age for participants is 16, and all but one participant was black. So far, 37 males and 23 females have participated, Mr. Williams said.

Participants most often were referred to the diversion program by Allegheny County Juvenile Probation but also are referred by Pittsburgh police officers, the city’s housing authority and Propel Northside, a charter school.

The agencies have referred youths to the program after the teenagers or young adults were charged with theft, drug offenses, assaults, disorderly conduct, trespassing and similar charges like loitering or shoplifting, according to the report. Sometimes, a police officer will make a referral before the youth commits any crimes, if the officer notices the teenager has begun to hang out with a bad crowd or is otherwise at risk, Mr. Williams said.

“They’re trying to be proactive and give kids some opportunities and some services before they reach that threshold point on the fence,” Mr. Williams said.

Juvenile probation sees around 1,500 cases annually, Ms. Booth estimated, and while probation officers can send kids to a variety of services like drug and alcohol treatment or counseling, it’s a piecemeal system with a variety of different providers, locations and personnel. The diversion program offers a more holistic approach with significant, long-term and personal support for individuals.

“We have a lot of different things we can do, but nothing that was ever a program that can be a one-stop shop,” Ms. Booth said. “And it costs the kids nothing; it costs us as a department nothing. It’s beautiful. The community put it together, and the community is funding it.” 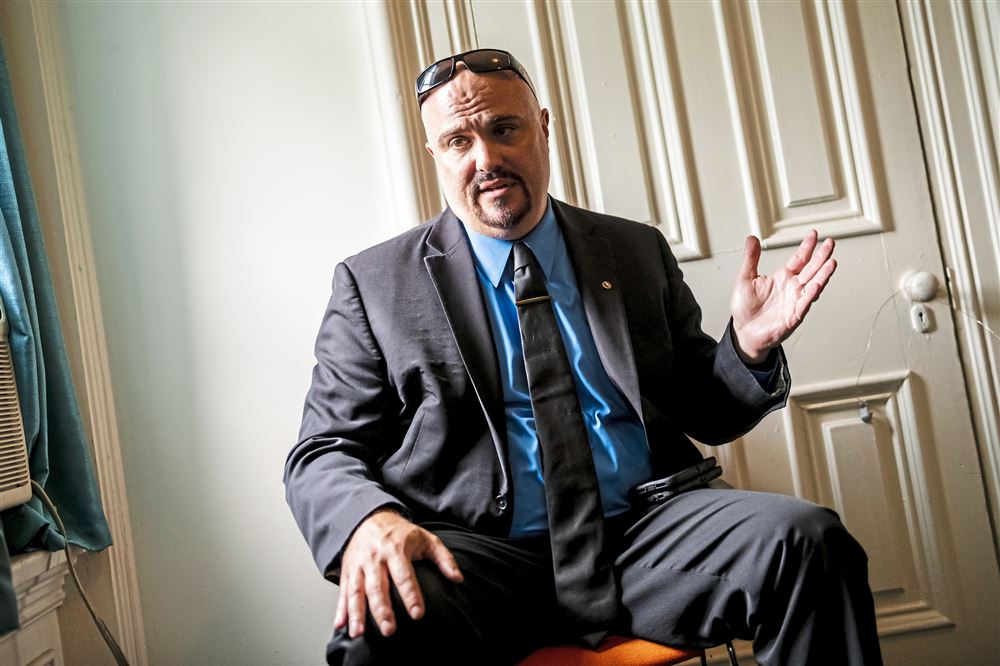 “We didn’t do this in any easy area – we did this on the North Side,” said Dann Carr, juvenile probation officer supervisor. “And it’s working.” (Michael M. Santiago/Post-Gazette)

“We didn’t do this in any easy area — we did this on the North Side,” said Dann Carr, juvenile probation officer supervisor. “And it’s working.”

Diana Bucco, president of the Buhl Foundation, which has made a 20-year commitment to improving the North Side, said the diversion program started at the urging of Zone 1 police Cmdr. Christopher Ragland.

“That’s what brought this whole thing together,” she said, adding that the cooperation among agencies has been one of several promising outcomes created by the program. District Attorney Stephen A. Zappala Jr. has endorsed the program as well, spokesman Mike Manko said Friday.

Foundation of Hope creates a customized plan for each participant, depending on that person’s particular needs, executive director Jody Raeford said. Sometimes, it’s just a job.

“We had one kid who was soliciting in a gas station, trying to pump gas for people to make money,” Mr. Raeford said. “He’s not a bad kid, he’s just trying to earn money. Management didn’t want him on the property and he kept coming back, so they called the police who arrested him for trespassing — we found employment for that child.” 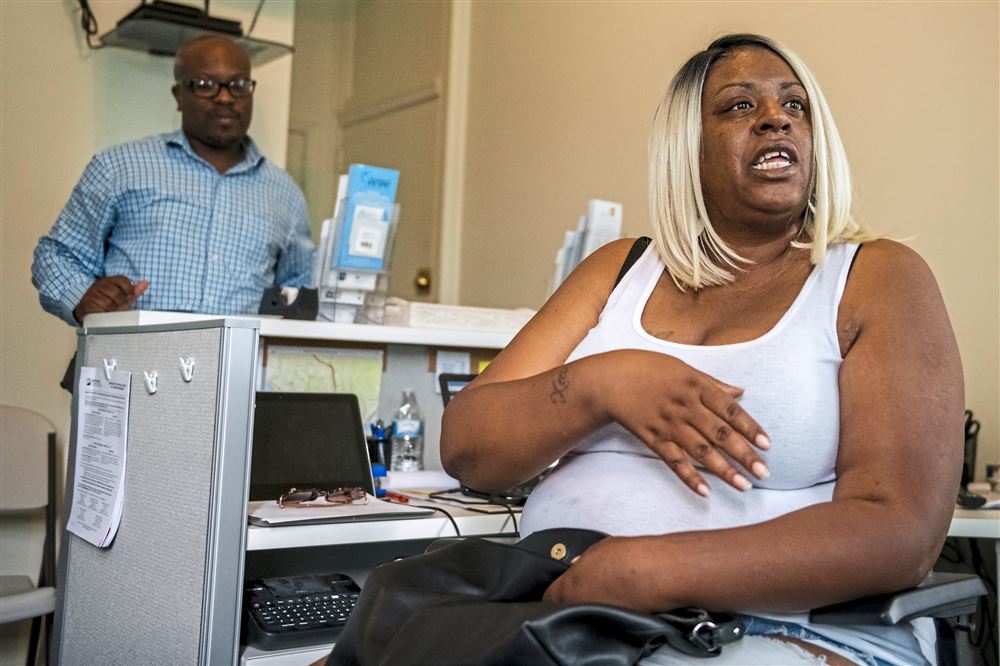 Jemicka Moore’s 14-year-old son is one of the few participants of a pilot diversion program for at-risk youths on the North Side who has reoffended. Still, Ms. Moore speaks highly about the program and its director, Jeffrey Williams, in the background. (Michael M. Santiago/Post-Gazette)

Sometimes, her son won’t come home, but he still goes to school, work and to diversion program events.

“My son completed the program, but Mr. Jeff never stopped being involved with him,” she said, adding later, “I know any type of day I can pick up the phone and call Mr. Jeff.”

For Alayah, a dinner at a Japanese steak house — designed to help kids understand etiquette and broaden their horizons — convinced her that Mr. Williams’ diversion program was different and worthwhile. Other excursions included a trip to Cedar Point Amusement Park in Ohio and Pirates games.

“A probation officer, they would not be doing that,” she said. “They’d be pee testing you and coming to see how you’re doing.” 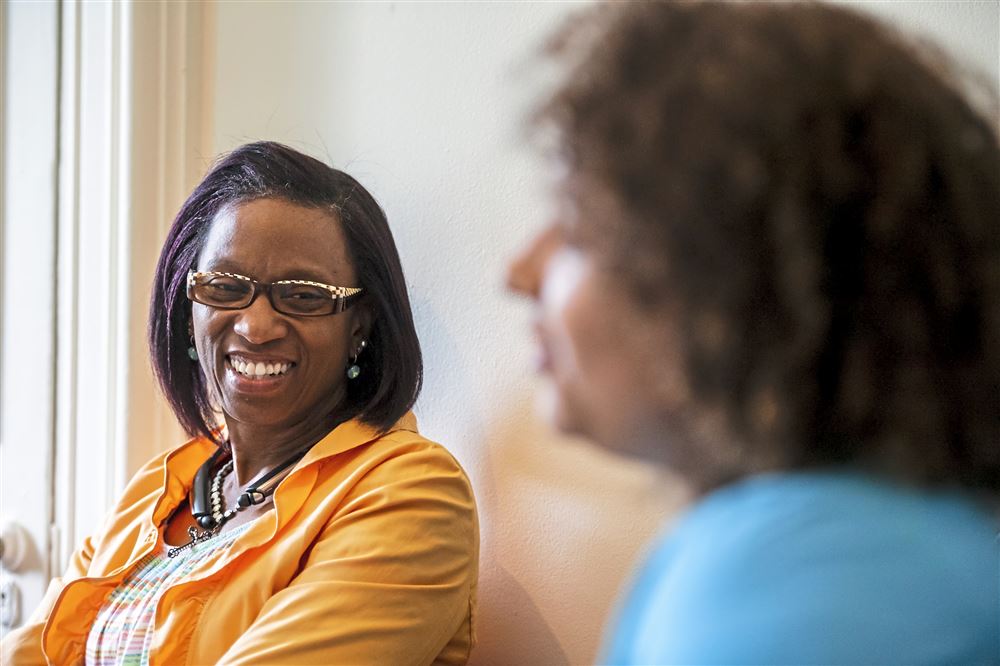 Kimberly Booth, assistant chief probation officer in Allegheny County, smiles as she listens to Alayah Thompson, right, speak about experiences in a pilot diversion program for at-risk youths. “We don’t want kids in the system who don’t need to be there,” Ms. Booth said. (Michael M. Santiago/Post-Gazette)