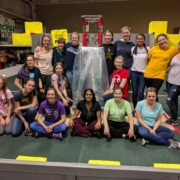 It’s not just the graduate students and PhD researchers inside Carnegie Mellon University’s top-ranked computer science school that are helping shape the future of technology.

For six winter weeks inside the basement of Newell Simon Hall, just past the underwater drones and moon rovers, you’ll find a group of young women building a giant robot and learning lifelong skills in engineering, business, leadership, teamwork, and more — all while having a lot of fun doing it.

Girls of Steel is Pittsburgh’s all-girls FIRST robotics team made up of 50 teenagers from more than 30 schools who build a game-playing robot for the FIRST Robotics Competition, part of a national program that aims to teach students about science and technology. 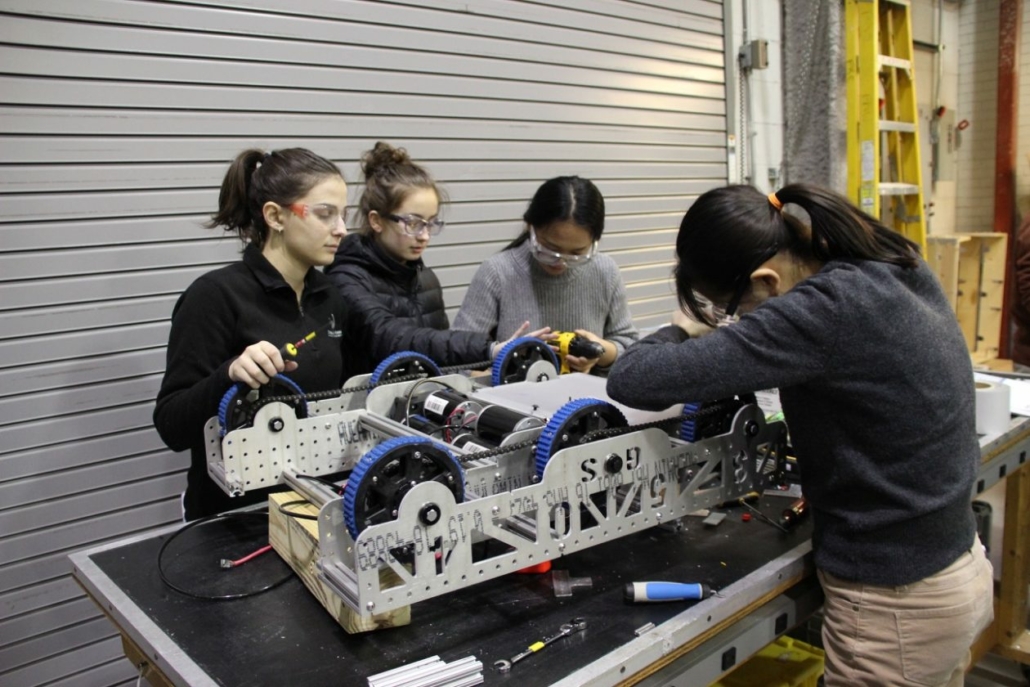 Girls of Steel team members work on one part of their robot. (GeekWire photo / Taylor Soper)

Beyond learning about the intricacies of a gear mechanism or how to design with CAD software, Girls of Steel members also gain valuable skills for college and their careers. Each participant gets both technical and business experience, figuring out everything from finances to fundraising to media outreach.

The team essentially runs a startup together, beginning in the fall for preparation to build the robot in January and February. There is some help from mentors — CMU students and researchers; parents; etc. — but nearly all of the work is done on their own. 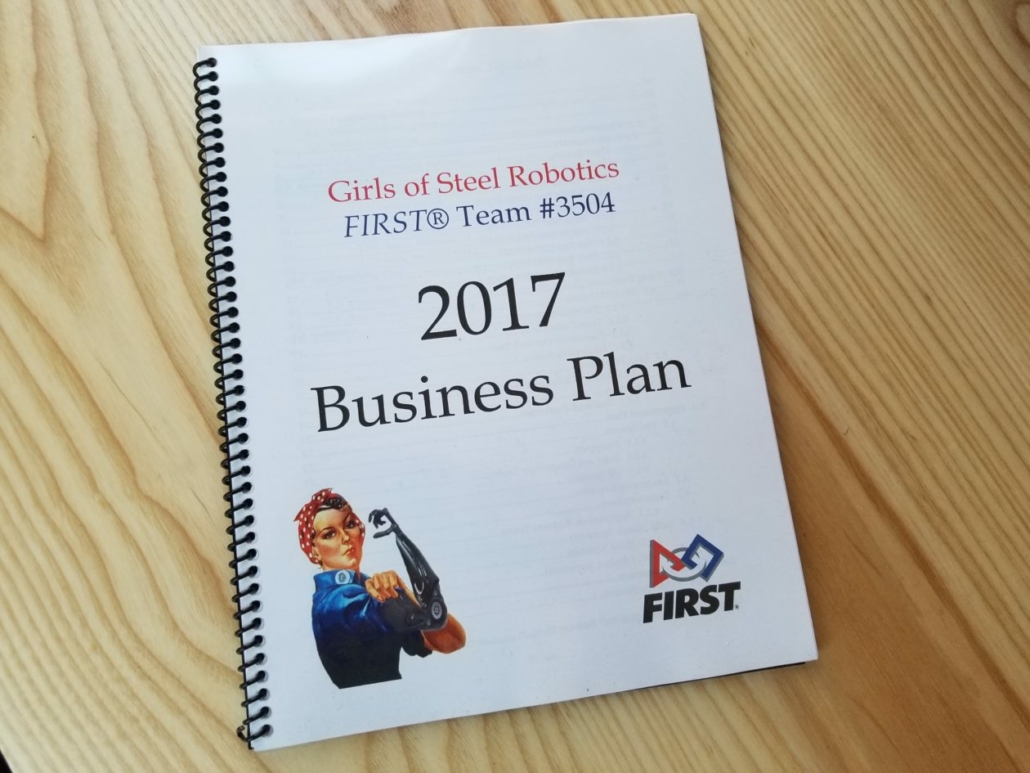 “In an all-girls environment, you really get a chance to push your own boundaries and explore without feeling like you have to meet certain expectations or behave in a certain way,” said Ziya Xu, a high school junior who is the finance lead and helps with robot programming. “Everyone here is accepting of each other’s ideas. You don’t necessarily have to worry about how your actions and the way you voice your ideas and opinions might be received.” 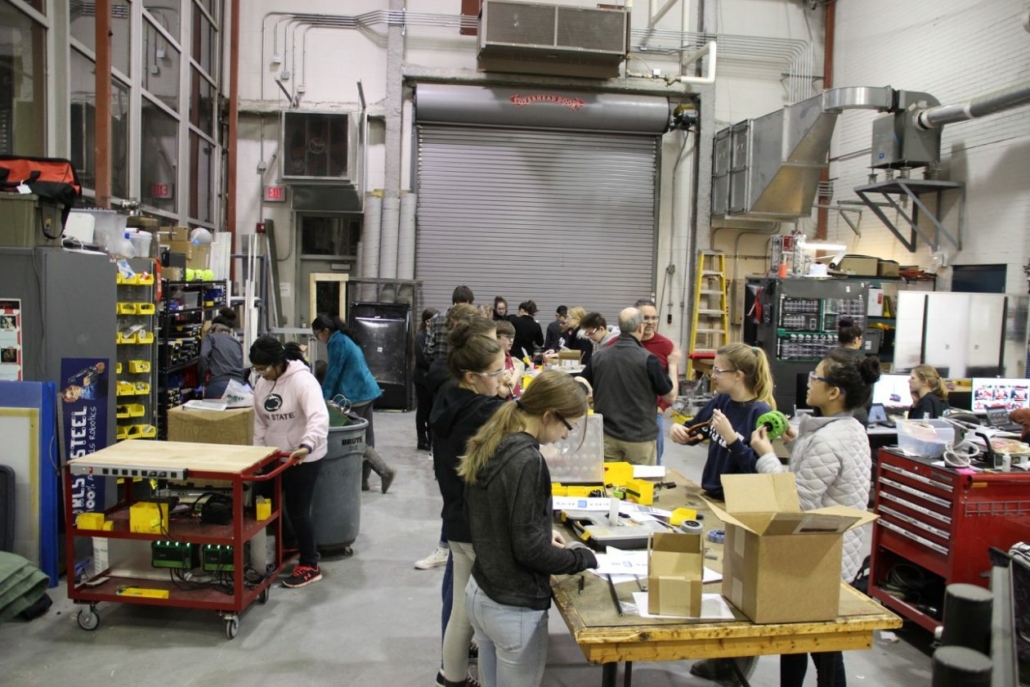 The Field Robotics Center at CMU transforms into a workshop for Girls of Steel. (GeekWire photo / Taylor Soper)

During chilly Pittsburgh winter evenings, the Field Robotics Center at CMU transforms into a buzzing workshop for Girls of Steel as the team meets after school to build the robot. It’s inspiring to watch the young women work together to solve problems and teach each other new skills as Keisha and CeeLo Green blast from the music speakers.

Working with a 50-person team to build one robot is no easy task.

“It’s a lot of time on one problem,” said Corrine Hartman, a high school senior. “We think about why something works and why it doesn’t. After a lot of time and different opinions, we get it working. It’s very rewarding when it does work.”

Hartman said her dream job is to work in the robotics industry.

“I really like robotics a lot and I’ve been able to find that out as being part of this team,” she said. 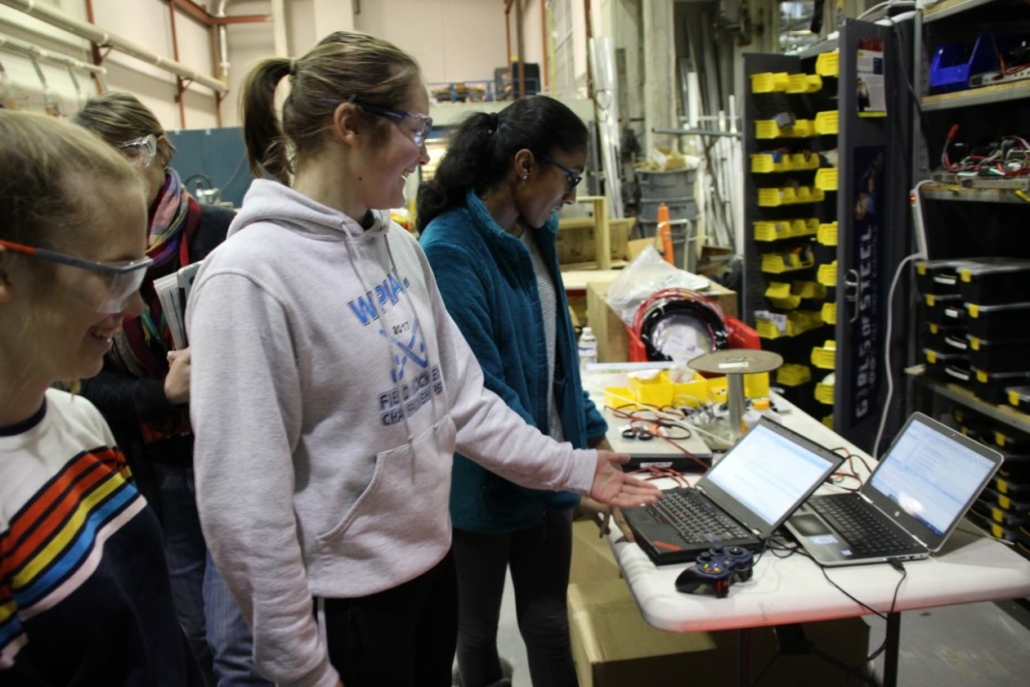 Tony Shreve, a mentor who has two daughters that participated with Girls of Steel, sees first-hand how the program helps open possibilities for young women.

“Most of the ones that come through here, by the time they are seniors, they know what they want,” said Shreve, an electrician. “They want some kind of engineering or some kind of science. And they have a blast doing it here. It really prepares them well for college and beyond.”

The team appreciates not only getting to learn more about engineering, but also picking up important non-technical skills.

“When I joined I didn’t know how to talk to people — I would have panicked and run away if you told me you wanted to interview me,” said AK Northam, a senior who plans to attend the University of Pittsburgh. “I’ve learned so many invaluable skills that I couldn’t get anywhere else.”

Girls of Steel also provides unique opportunities. In January the team got to meet a real Rosie the Riveter when Julia Parsons, a 96-year-old Carnegie Tech graduate and former Navy codebreaker, visited campus.

Patti Rote helped create Girls of Steel in 2010 after she noticed too few girls participating in the competition and only in marketing roles.

“I decided to change that situation as I’ve believed for a long time that women are as capable as men when it come to STEM subjects and of course, robotics,” said Rote, a longtime Pittsburgh business executive who ran the robotics industry program at CMU from 2010 to 2013. “I was out to prove my theory.”

She teamed up with George Kantor, a senior systems scientist at CMU’s famed Robotics Institute, to help launch Girls of Steel. The program, branded around Rosie the Riveter and Pittsburgh’s manufacturing roots, has grown each year since then and added teams for younger students who are mentored by the high schoolers. Rote and Kantor have also created an entire robotics and STEM educational program around the team itself. 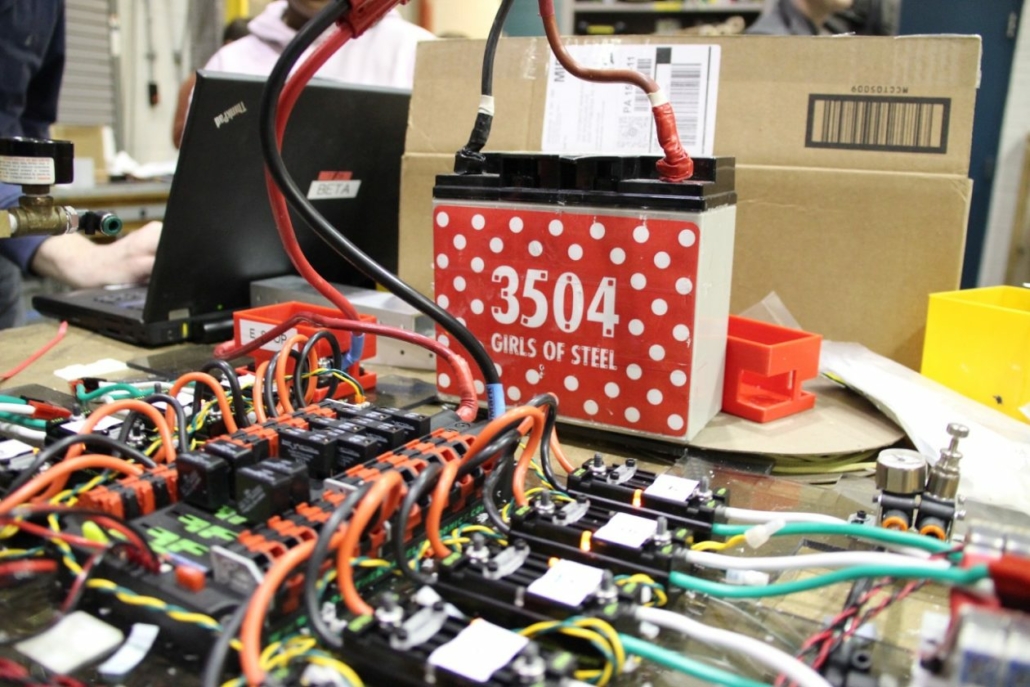 Girls of Steel even caught the attention of former president Barack Obama, who gave a shout-out to the group in 2016 during a speech at The White House Frontiers Conference in Pittsburgh.

“Today, our focus is closing that gender gap that exists in robotics, engineering, and science fields so that young women are equipped to compete with the best of them,” Rote said.

“We just have a talent shortage of engineers and the way we do things now essentially rules out half of the population,” Kantor said. “Culturally from a very early age, girls keep getting messages that this isn’t the kind of activity they should be doing. Bottom line, we need more engineers, and if we can get girls to believe they can do it, then they’ll go out and do it.” 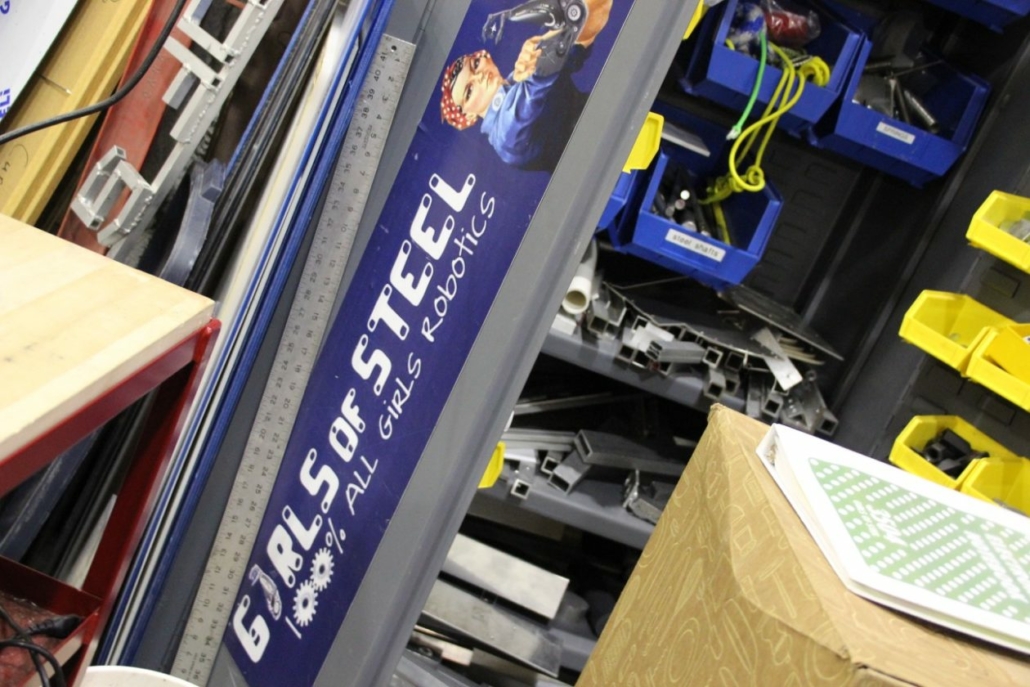