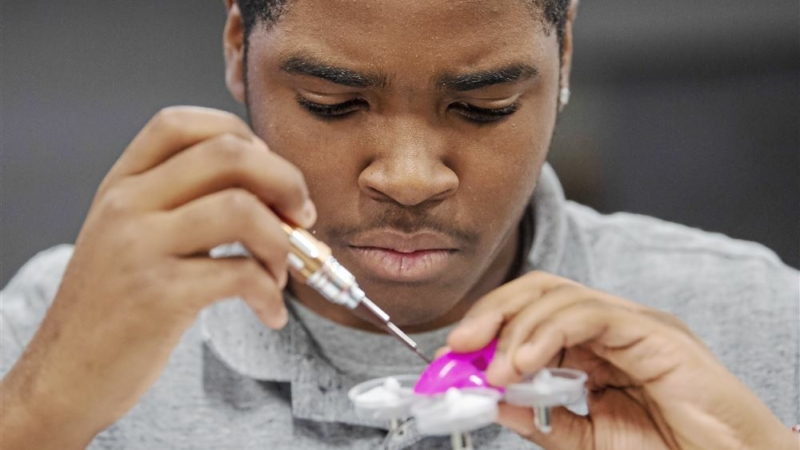 Drones are fun to play with and some are even cute, but beware — they can frustrate you, tease you, even startle you.

Donald Poindexter and Ayanna Hall know first hand as students of the Drone Academy, held every Thursday after school at Nova Place, Allegheny Center, on the North Side.

At a recent session, Ayanna, a freshman at City High, was ready to send her drone up. She placed the little Tello on the table, picked up her phone, activated the app and — zhurrrrp! — the drone leapt at her and she recoiled. Her classmates laughed, she laughed and their instructor, Lori Paluti, smiled.

These drones, she said, will “do their best to foil you.”

Donald’s turn: The Central Catholic 11th-grader positioned his Tello, activated the app and it shot straight up, slamming into a ceiling tile. Amid howls of laughter, the wide-eyed operator tried again. Same result.

The Drone Academy began last fall and runs through April as a remote program of the Citizen Science Lab, a fee- and foundation-supported nonprofit based at the Energy Innovation Center in the Hill District. 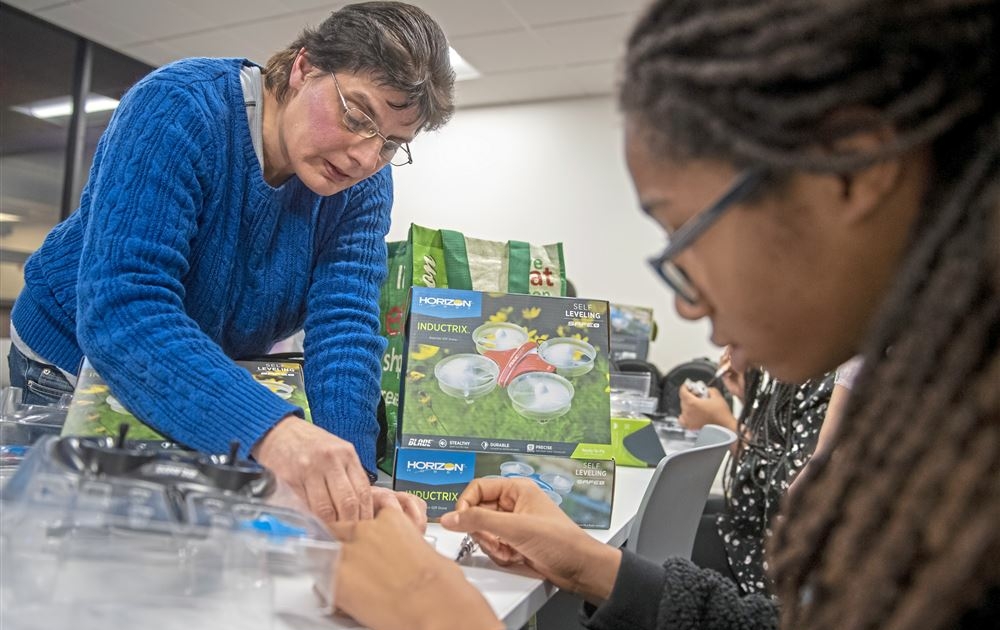 Instructor Lori Paluti, left, helps disassemble a drone with Andre Curry, 15, of Pittsburgh Allderdice High School, during Citizen Science Lab on Thursday, Jan. 17, 2019, at CoLab18 in the North Side.

The Drone Academy’s host is CoLab18, a co-working space for North Siders; 18 refers to the number of North Side neighborhoods.

The students are using three small drones — the 2-pound Mavic; the Tello, at about a pound, and the Inductrix, which sits in the palm of your hand and looks vaguely like a snowflake ornament with a pig tail. Every drone has different capacity, endurance and range.

The curriculum includes writing programs, coding and building drones from a kit and from a 3D prototype. The students are still getting the hang of the order and fit of rotors and motors and the finesse of piloting.

They are learning physics in the process, working toward taking the Federal Aviation Administration exam, which costs $150. Passing it could launch these teenagers into jobs or self-employment in one of the country’s fastest growing industries.

Drones have become such big business that recreational use is not keeping up. Goldman Sachs forecasts a $100 billion market opportunity for the drone industry by 2020, the lion’s share currently in the military. The greatest growth is in the commercial sector, which is expected to spend $13 billion putting drones to work by 2020, according to the same report.

Drones have been widely used by photographers and filmmakers, for spying and to make military strikes, but their use has expanded into many fields, including the sciences.

UNICEF reported recently that a 1-month-old on a remote island in the South Pacific became the first child to have a vaccine delivered by a drone.

Drones are used in search and rescue operations; for delivery of medical supplies; to carry packages, analyze soil and crop health and survey land; for border security; by railroads to inspect tracks; for racing and nefarious purposes such as chemical attacks.

In April, the students will go to Atlanta to take 3D photos of numerous statues of famous African-Americans at Morehouse and Spelman colleges and Tuskegee University two hours away in Alabama. Their contributions will diversify the database.

A drone programmed to take 3D photos circles objects, shooting every few seconds at every angle to produce enough images for the photographer to scan an accurate upload. Uploads go to an open-share database used for research and to make 3D printouts for prototyping.

This trip will be part history lesson, too. One of the teens said he didn’t know who the Tuskegee Airmen were.

Ms. Paluti and Ashton Callipare, a senior at Duquesne University, run the sessions each week.

“I got into drones in 2014,” Ms. Paluti said. “I was flying a $30 drone around and started reading more about them. It got more and more interesting.”

She uses her FAA license as a freelancer and is otherwise employed as a tutor in the computer science department at the Community College of Allegheny College.

Marquis Green, a 10th-grader at Urban Pathways Charter School, said drone school was a way of getting out of the house, but he was motivated beyond that. His father and uncle fly drones. He moved his Tello around the classroom like someone driven to get good at it.

At one point, he had it hovering above the table. It drew a bead on the person across from him and began sliding toward her, shifting away at the last moment.

“It knows avoidance,” he said, grinning.

One drone buzzed furiously on the table without moving.

“Check your props [propellers],” Ms. Paluti said to the student. “You may think you got ’em in order but you didn’t.”

Jensynia Baynes, an 11th-grader at Pittsburgh CAPA, said she is curious about the many uses for drones and wants to get her FAA license.

When it was her turn to take her Tello up, she activated it and — pfffffft! — it flipped over.

“When they flip,” Ms. Paluti said, “you have to investigate to see what’s going on. This will teach you patience.”

Pittsburgh SAT scores went up in 2016. Can they keep the momentum?