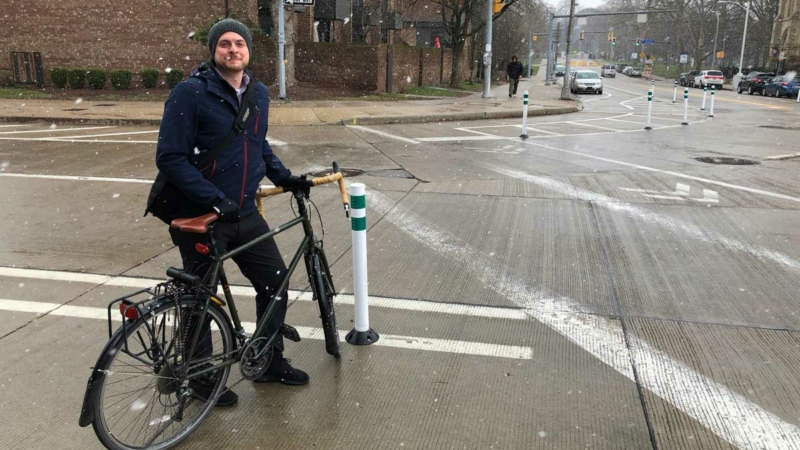 Nick Ross stood at the corner of Ridge Avenue and West Commons, an intersection on the loop surrounding Allegheny Center.

It’s part of the route he bikes along everyday during his commute between his home in the Mexican War Streets neighborhood and his office downtown.

“This is what’s known as a protected intersection type of design, so as the bike lane comes into the intersection, it kind of jogs around the corner so that there’s a barrier between the bike lane and the driving lane turning,” Ross said.

For the last four years, Ross has been the chair of Walk Ride North Side, the bike and pedestrian advocacy committee of the non-profit North Side Leadership Conference.

“First and foremost, everything starts within the community on our end,” said Ross. “Our meetings are open to the public, anybody’s welcome to come and that’s really where we generate our ideas.”

Some of Walk Ride’s activities include cleanups and group rides that serve to preserve and promote existing bike trails and lanes on the North Side.

They also advocate with local and state officials for new lanes. Ross remembers that early in his tenure as chair, the committee was able to help secure the addition of lanes along stretches of East and East Ohio streets.

Jerry Green, the previous chair of the committee, says Ross was able to hit the ground running in part because of his work background.

“Nick is a professional traffic engineer and he’s done a great job of making connections of people who get things done on the road. He has a kinship with the traffic engineering people at the city and at PennDOT,” said Green.

More recently, Ross has used those same engineering skills to help out on a pretty big project: the redesign of the roadway circling Allegheny Center.

Ross said that at certain times of the day, there wouldn’t be much traffic at all on the loop. But when it was busy, it became almost like a four-lane highway due to it’s central positioning in the North Side, said Ross.

“For most [cyclists], it was kind of a no-go zone,” said Ross. “Drivers were just too fast and too aggressive to feel comfortable riding a bike around it.”

As the city has started to get moving on the redesign in the last couple of years, Ross said he’s gotten the chance to give feedback.

“Typically, you wouldn’t have an agency reach out and solicit input … but to their immense credit, they were always willing to do so,” said Ross.

Emily Gaspich, a project manager with the city’s Department of Mobility and Transportation, said that Ross’ professional background and the fact he regularly commutes through the area by bike makes him very well-equipped to add to the discussion.

“From very early on, Nick was a very strong advocate to make sure that the cycle track was appropriately protected,” said Gaspich.

The city is currently piloting changes around the circle including a two-way bike lane around the interior and a dedicated parking lane on the outside. At the intersection of Ridge and West Commons that Ross bikes through everyday, flexible posts line the corners, separating the bikers from the road.

Gaspich said the final build-out is likely to include even more robust protections for bikers at corners and intersections, like planters and even cement islands, as well as shortened crossing lanes for pedestrians.

An East Ohio Street that draws Steelers, Pirates fans? Some see it, others just...