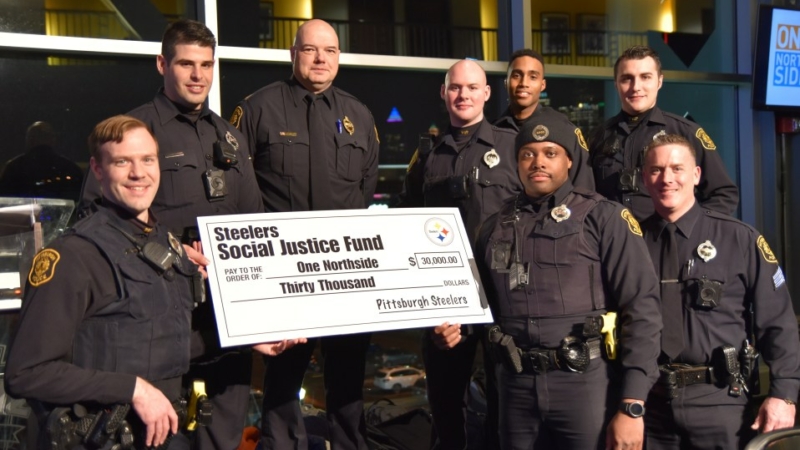 THE FEB. 13 CELEBRATION AT HEINZ FIELD WAS A CHANCE TO INFORM THE NORTHSIDE PUBLIC ON PROGRESS THE ORGANIZATION HAS MADE IN THE PAST YEAR.

One Northside began in 2013 as a partnership between The Buhl Foundation and a number of community organizations and institutions in Pittsburgh. Today, the initiative focuses on five key areas of a community: education, employment, health, place and safety.

The highlight of the celebration was an appearance by Pittsburgh Steelers’ President Art Rooney II. He announced a partnership between the Steelers, United Way and One Northside, and presented a $30,000 donation to One Northside.

“This year, we started the Steelers Social Justice Fund, which is a fund that the players and team came together on to partner with all the great agencies in our community that are doing good work,” Rooney said.

A focus of the Social Justice Fund is supporting programs that help police collaborate with community members.

The celebration also highlighted success stories from each of One Northside’s five focus points. About ‘place,’ Mayor Bill Peduto spoke about how the city sat down with Northside community leaders.

“One of the great joys that I’ve had… is the opportunity to work with community-based organizations in the Northside to create the priorities of what needs to get done,” Peduto said. “Whether it’s in Brighton Heights with the senior center, or in Fineview with the playground, or in East Deutschtown in working on the park.”

Buhl Foundation president Diana Bucco brought up another city partnership, which places blue recycling bins throughout neighborhoods.“We at One Northside piloted [the blue bins] three years ago, and they were incredibly successful,” Bucco said.

Their success has led to the City’s Department of Public Works introducing legislation to allocate $350,000 for over 13,000 recycling bins to be placed across Pittsburgh.

Diana Bucco, Buhl Foundation president, addresses the attendants of a community gathering at Heinz Field on Wednesday, Feb. 13, and shares the organization’s progress over the past year.

One Northside also collaborates with Pittsburgh Police to help benefit the community. In 2018, one major accomplishment was opening the first police station in the Northview Heights neighborhood.

One Northside is tackling the issue of the school-to-prison pipeline by working with the Allegheny County Juvenile Probation Office.
“[The neighborhood] told us that our kids need help sometimes, and a kid making a mistake shouldn’t be the beginning of a life in the criminal justice system,” Bucco said.

With that, the North Side Diversion Program was founded in 2016. It aims to prevent minor, nonviolent criminal offenses from severely limiting a young person’s future prospects by working with offenders on a case-by-case basis, developing an individualized plan of action to address underlying issues. Since its inception, 94 percent of participants have not committed a second offense after entering the Diversion Program, according to Bucco.

But the point Bucco made most clear is that One Northside is evidence that communities working together, led by community members, can achieve powerful results.

“This isn’t about what I’ve done, or what the Buhl Foundation has done. It’s about the partnerships and leadership coming out of the community.”

Pittsburgh SAT scores went up in 2016. Can they keep the momentum?
Scroll to top