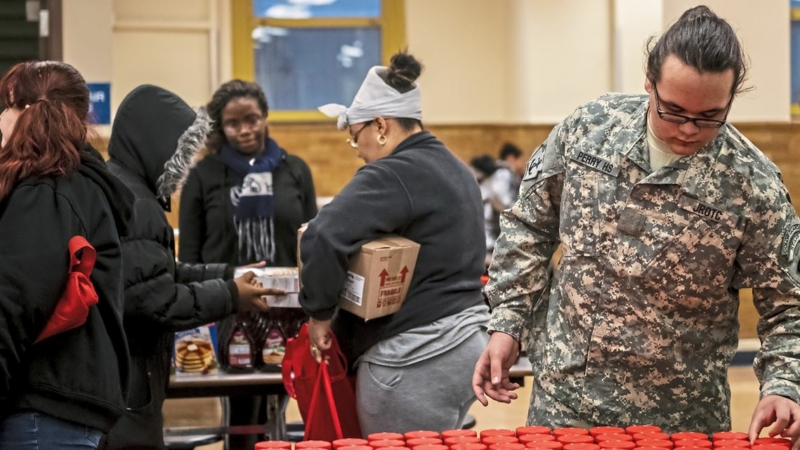 Tucked away in a former computer lab that adjoins the school library sit neatly organized rows of peanut butter, stacks of toothpaste and a table full of fruit cups.

Cans of ravioli are piled along one side, and baggies of travel-sized toiletries are stacked in a back corner.

The bags of jambalaya mix aren’t bad with taco sauce on them, jokes Sheila May-Stein, the librarian at Pittsburgh Perry High School. She usually has a slow cooker going in her library for kids to grab a bite to eat if they’re hungry during the day.

That empty classroom is the home of Perry’s student-run food pantry, the only one of its kind in Pittsburgh. Every week the Greater Pittsburgh Community Food Bank delivers about 1,000 pounds of non-perishable food to the school, where members of the Junior ROTC haul the boxes inside and members of the Gender Sexuality Alliance and the school’s nursing education program unpack and sort the goods. 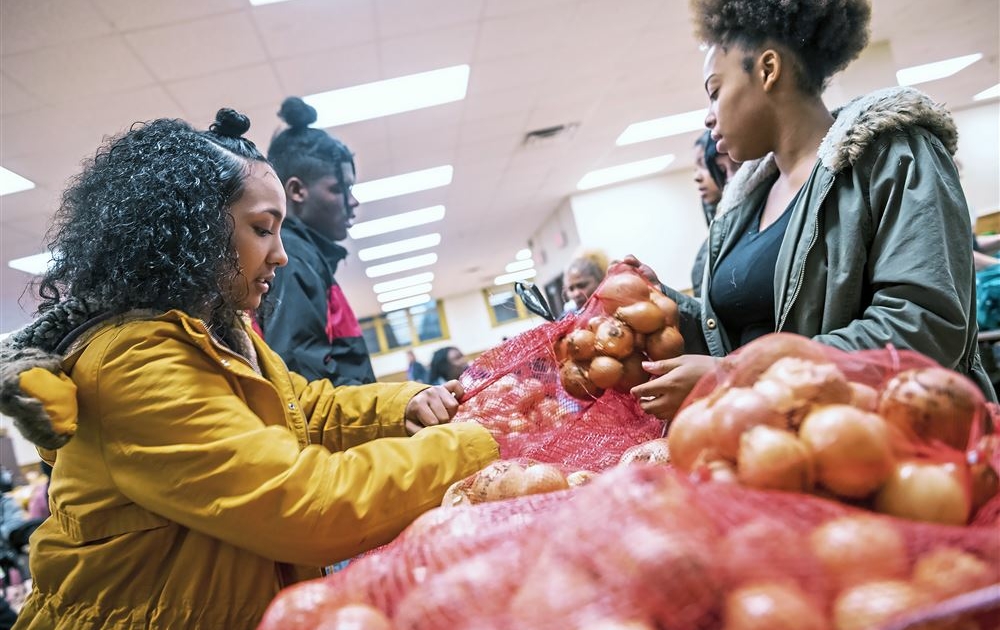 Shayla Glover, left, Jahari Owens-Dixon, center, and Lakia Gardner, all of the North Side, help arrange bags of onions for attendees of the “pop-up” food pantry at Pittsburgh Perry High School

“We want to solve the problems no one else is stepping up to solve,” said Ms. May-Stein, who is also the faculty sponsor for the GSA. “When you have kids who are eating, they are able to think and to work.”

Perry, in Observatory Hill, enrolls about 430 students. According to district data, about 79 percent of those students are economically disadvantaged. All students in Pittsburgh Public Schools receive free breakfast and lunch, but too often that is not enough, especially for high school students, Ms. May-Stein said. The portions are small, students can’t have second helpings and the food isn’t always very appetizing for kids.

“Even if they eat the free breakfast and lunch, that’s not enough food and it’s not a good enough quality of food to nourish a growing child,” she said.

The food pantry was launched by the GSA club last year, after Ms. May-Stein and other teachers noticed students in the school who were hungry.

One student, who Ms. May-Stein said was “being abused in one home and starved in another,” would always ask to share some of her lunch. And during club discussions about bullying, her students wondered if some kids behaved the way they do because they were lacking something that they need — like food.

The club was inspired after a visit to the Food Bank’s facility, and they came up with the idea to create a food pantry at Perry.

“As soon as we started last year, there were so many people who wanted to help,” said Tamia Trent, a 17-year-old senior.

At first, the pantry was set up like a grocery, with students coming to take what they need. But since not all of the supplies in the pantry are individually portioned, it was challenging for students to carry around jars of peanut butter or boxes of pancake mix in their backpacks, Ms. May-Stein said. 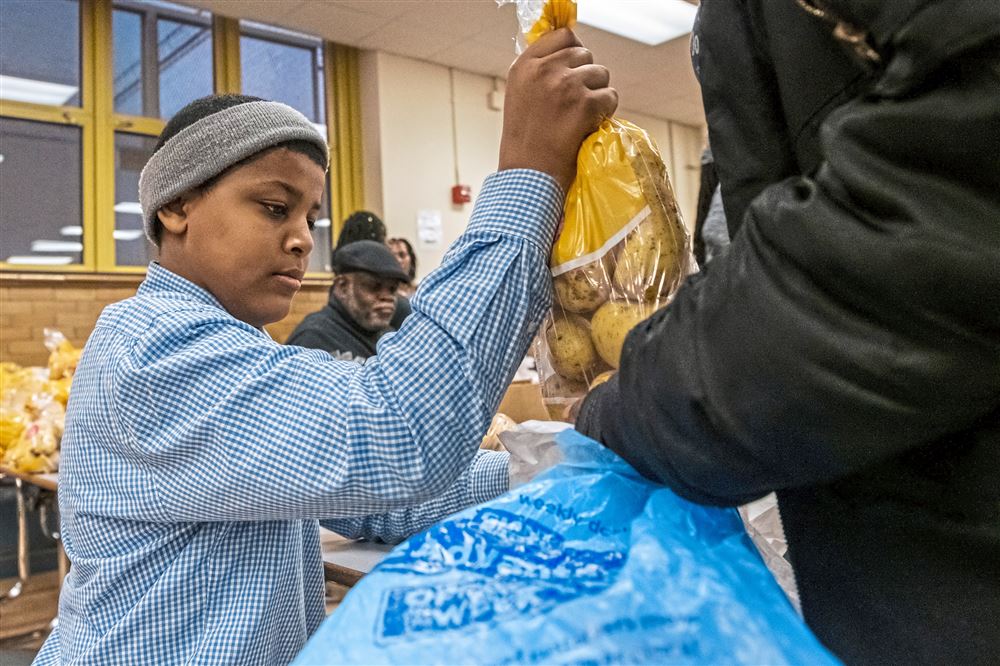 Jacquay Jackson, of the North Side, places a bag of potatoes in a bag for an attendee of the “pop-up” food pantry Wednesday, Dec. 19, 2018, at Pittsburgh Perry High School.

A majority of teachers at the school now come to the pantry to do the “shopping” for their students, and set up food stations in their classrooms. Some, like Ms. May-Stein, have slow cookers in their rooms, or microwaves or mini refrigerators. Other keep snacks, bread and paper plates on hand, and let any student who wants to eat do so during class. Students who need to take food home with them can visit the pantry and take what they need during the last period of the school day.

“They eat in the classrooms,” Ms. May-Stein said. “So they can eat and learn. So when they’re hungry, they just go to class.”

And a handful of teachers volunteered alongside the dozen club and JROTC members on Wednesday, helping the Food Bank staff with Perry’s first “pop-up market” in the school cafeteria. Family members of Perry students were able to come into the school after class let out for the day and fill shopping bags with the usual pantry items as well as fresh produce and frozen meat. The students helped set out about 5,700 pounds of potatoes, onions, cabbages, pantry goods and frozen chicken breast, sausages and other proteins brought to the school from the Food Bank.

“It makes me feel like I’m doing my good deed to help others,” said 15-year-old Destiny Jenkins, a member of the GSA and Ms. May-Stein’s book club, as she distributed four boxes of mac-and-cheese to each visitor.

Jennifer Grus, an English teacher at the school, wore a headband with reindeer antlers on them as she doled out jars of peanut butter and jelly.

“The kids are really into it,” she said. “I think it’s a good thing for them to learn.”

Ms. Grus keeps a supply of granola bars, cereal and trail mix from the pantry in her classroom. A lot of her students are “starving” in the morning, either because they miss breakfast or don’t eat enough. And the school bell schedule has some kids eating lunch mid-morning, so they are famished again by early afternoon.

Rochelle Oaks, another teacher, said students sometimes miss breakfast because class starts so early in the morning. She and Sharon Brentley, whose classrooms are next to each other, call themselves the “CrockPot Connection.” They each make something in the slow cooker once a week — often they crack open some cans of ravioli or spaghetti from the food pantry — and have peanut butter and jelly sandwiches the rest of the week. BreadWorks bakery has been donating bread to Ms. Brentley, who lives nearby.

Principal Darrell Prioleau said for now, there’s no way to measure the effect the school’s food pantry is having on student attendance or behavior.

And the school plans to host more pop-up markets for students’ families at least a few times a year.

“It’s just another way for us to give back to the community,” he said.

Amber Farr, director of the Buhl Foundation’s One Northside initiative, said a community survey four years ago identified food insecurity as a major issue facing residents of the North Side, which has only two groceries. One Northside, along with the Food Bank and Focus Pittsburgh, has a backpack programs for kids at any North Side school who signs up. They leave school Friday afternoons with a bag packed with snacks and non-perishable food to get them through the weekend. Perry takes it one step further.

Ms. May-Stein said she was worried not many people would show up for the market, even those she distributed hundreds of fliers and robo-calls were made promoting it. But about 70 families were served.

Despite the success of the food pantry and the pride she feels for the Perry students and teachers who helped make it that way, Ms. May-Stein said she recognizes that the program is a “supplement,” not a solution to the problem.

“We have a food pantry in the place where our computer lab used to be,” she said. “ We have teachers using up their time — their instructional time — dumping out cans of ravioli for starving kids. This is not such a happy story.”

CoLab18 to open at Nova Place
Scroll to top