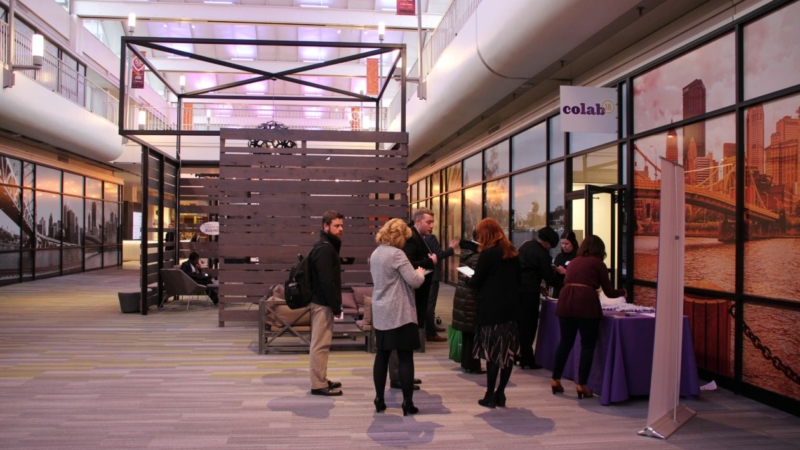 A space where North Side nonprofits, businesses, groups and organizations can gather for meetings or trainings will open Wednesday inside Nova Place.

CoLab18 will be a hub for creativity, problem solving, collaboration and technology, said Juan Garrett, executive director of Riverside Center for Innovation, one of the partners behind the space.

“It’s a space where we can really engage the community in conversation,” Garrett said.

CoLab18, named for the 18 neighborhoods making up Pittsburgh’s North Side, grew out of the One Northside initiative to bring together the area of the city. The Buhl Foundation, Nova Place, Comcast and Urban Innovation 21 formed a partnership last year to support the initiative. Garrett’s Riverside Center, the BNY Mellon Foundation and Innovation Works have also joined.

Riverside Center for Innovation received a $75,000 grant from The Buhl Foundation in December. Comcast has provided gigabyte speed internet throughout Nova Place.

CoLab18 will have meeting rooms and work tables. It will have tablets on hand and have high-speed internet available. The space can accommodate 60 to 100 people, Garrett said, and is open to everyone. CoLab18 will start taking reservations Wednesday. There is no fee to reserve the space, Garrett said.

Garrett said the groups are in talks with Microsoft to provide business training. There will be youth programs focusing on coding and programming. Garrett hopes the space becomes a place people gather to discuss critical issues on the North Side, such as transportation and mobility, workforce development and education.

“It’s going to be a space that is really going to help me introduce technology,” Garrett said.