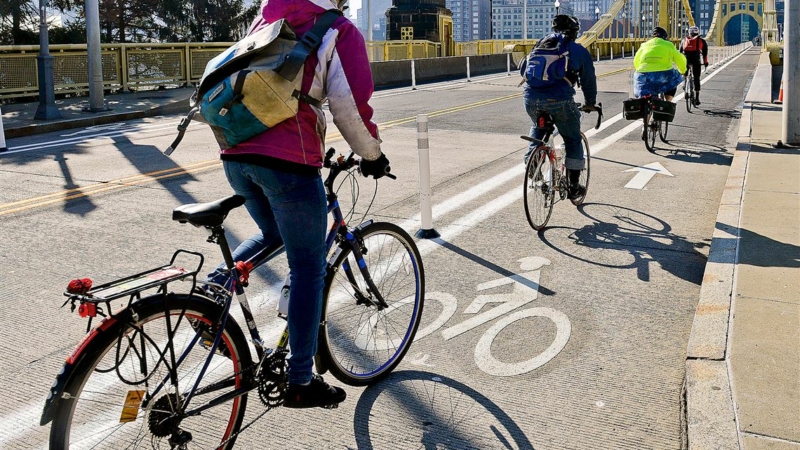 The transformation of the one-way circular road around the former Allegheny Center on Pittsburgh’s North Side into a two-way road with bicycle lanes begins this week.

On Tuesday, the city announced that work would begin on plans to install two-way bicycle lanes on the inner-most lane of the circle. That will result in moving parking to the outer edge of the circle, reducing vehicular traffic to two lanes.

The work, which includes painting, installation of flexible delineators, parking signs and traffic signal timing improvements, should be completed by Sept. 22.

In a news release, Mayor Bill Peduto and neighborhood leaders said the project is long overdue. The traffic pattern was installed when the mall opened in the 1960s.

“The failed design of Allegheny Circle as a four-lane, high-speed ring road has needed improvements like this for decades,” Mr. Peduto said. “This redesign will further enhance the ongoing transformation of Allegheny Center into a hub for 21st-century infrastructure and development in the North Side.”

Next year, the city will complete the project by switching traffic to one lane in each direction, replacing most traffic lights with stop signs and extending sidewalks with bumpouts at intersections to make it easier for pedestrians to cross the street. The work will cost about $1.3 million and include substantial federal funding.

The city worked with the Buhl Foundation, the Northside Leadership Conference, One Northside and Faros Properties to develop the project. Faros bought the former Allegheny Center shopping and office complex in 2015 and is converting it into high-tech office hub known as Nova Place.

The city’s long-term goal is to reconnect East and West Ohio streets, with the street running through the plaza at Nova Place and in front of the Children’s Museum of Pittsburgh and the New Hazlett Theater. The city already owns the rights of way for most of that project.

Walkabout: It takes a team effort to eliminate waste
Scroll to top