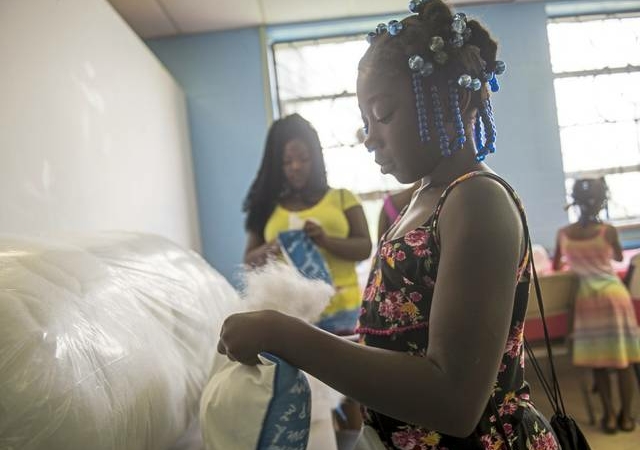 The pillows are more than blue fabric decorated and stuffed with foam.

They say something about the young person who made them.

One says “Jesus Loves You.” Another reads “#RIP.” A third has the number “187” on it, a three-digit synonymous with murder, crime and police. Another read “Gang, Gang.”

The pillows are part of an art project for children who live in Northview Heights, a North Side neighborhood and housing complex. Ulric Joseph, who teaches art at the Maryland Institute College of Art in Baltimore, Md., but lives on the North Side, led the project, which is funded by the Buhl Foundation.

“Some followed directions and others didn’t,” Joseph said of the kids. “Some never came back. Doing this is not about the money. I see my kids in these kids, and I just want the kids to have a good experience.”

The children, most 14 or younger, show up for the art class at a church in Reserve Township on the boarder of Northview Heights. They come in from homes that may be tense or broken and from streets that can be prone to violence and crime, Joseph said.

Inside the church, they find a welcoming room, other children like them and Joseph, who is eager to spend time with them.

Each of the 50 kids was given a pillow and asked to create designs on both sides. Last Wednesday, Joseph talked about the work as he helped them stuff the pillows so they could take with them.

Making pillows is about more than creating a soft space for the children to rest their heads, Joseph said. It also gives them a chance to be creative and express themselves.

After the craft, the kids get dinner.

“This is about feeding the kids good, nutritious food,” said Cheri Pogue, chief operating officer for United Methodist Church Union, a non-profit that brings the free food for the kids. “And we also want to feed their soul. Without the grant we would not be able to do this art.”

Joseph asked each child to put his or her name on the pillow so he would know which one belonged to which boy or girl. He had the children make designs on cyanotype, a photographic printing process that produces a cyan-blue print. The original is green but changes to blue when it’s exposed to the light.

It was fun for Tayonnah White, 8, who said she loves that the pillow is fluffy.

Passion Cox, 8, wrote “Jesus Loves You,” on her pillow because she said she loves Jesus.

“I really liked making the pillow,” Passion said. “I am going to take it home and sleep on it.”

Honestty Robinson, 12, put her nickname, Onney, on the pillow. She also had some social media hashtags, including “#RIP,” for her late uncle and other people special to her.

“Our pastor has this for something for us to do and this is helping our neighborhood do stuff,” Honestty said of the craft. “It creates positive things.”

Rev. Diana E. Marshall, pastor at New Dawn Beginnings Outreach where the kids worked on their crafts, said the project brings smiles to their faces.

“The kids get a kick of out this project,” Marshall said. “This project gives these children a sense of responsibility and discipline; and that it takes steps to come to fruition; and they learn patience. Once they understand the process, they want to help others.”