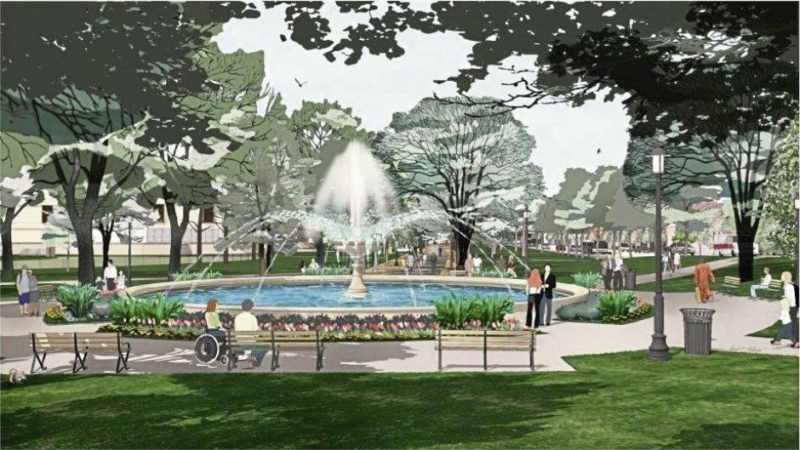 Patricia Rooney remembers Pittsburgh’s Allegheny Commons park at its zenith when it boasted meandering gravel paths, four flowing water fountains and lush gardens. The park on the city’s North Side, which fell victim to financial constraints over the years and became a haven for drug users and crime, is experiencing a rebirth thanks to the efforts of several civic groups and the Pittsburgh Parks Conservancy.

Workers earlier this month began a $2.5 million restoration of the park’s northeastern corner that will replicate its 19th century design. The project’s focal point is a new fountain. The work funded through charitable donations also includes restoration of gardens and gravel pathways and new lights and benches.

“We practically grew up in the park, and the fountain was always there across from Allegheny General Hospital,” said Rooney, 86, wife of the late Dan Rooney, former Steelers chairman and U.S. ambassador to Ireland. “The park was just lovely. We had playground space and lots of wonderful statues. It was full of all the children in the neighborhood.”

The lifelong North Side resident belongs to a citizens group that in 2002 commissioned a master plan for the park. The Allegheny Commons Initiative and Northside Leadership Conference along with the city and parks conservancy has been working since then on restoration plans estimated at $25 million.

The organizations have completed restoration work on the park’s southeastern corner and is focusing on a one-block square area along North and Cedar avenues.

The park was built in 1867 in what was then Allegheny City, which was annexed by Pittsburgh in 1907, once featured four fountains. The basin for the fountain in question was used to build a retaining wall in Riverview Park.

The new fountain, a replica of the original, will include a 50-foot circular basin with a stone rim, large Grecian vase in the center and a central water jet surrounded by 16 smaller jets. Plans call for four beds for flowers and ornamental shrubs around the fountain.

“Personally I’m thrilled to see the fountain return,” Rooney said. “It’s a really big asset for us. It’s been a lot of hard work, a lot of fund-raising and a lot of support from the city and the administration and foundations.”

Originally published on May 17, 2018
SOURCE: TribLive