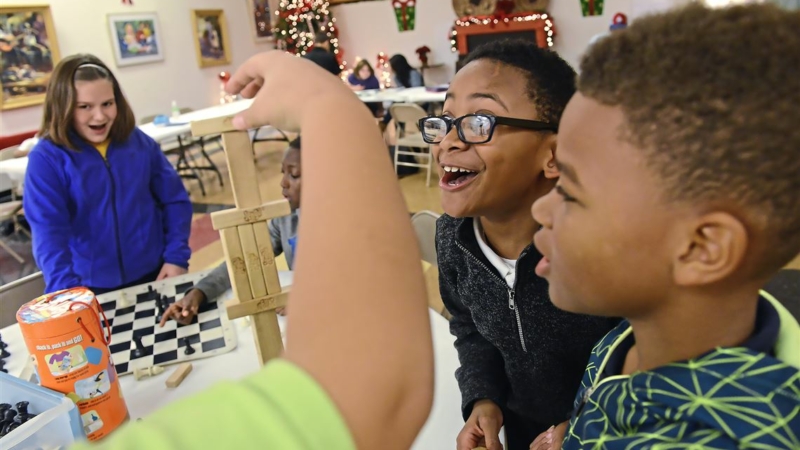 There are 21 files in a cabinet at the back of the office inside Project Destiny’s headquarters building in California-Kirkbride — each one documenting the challenges a North Side family is facing.

Some needed help with a major health crisis, others something as small as buying a bed.

The Rev. Brenda Gregg, Project Destiny’s founder and pastor of a North Side church, said about half of those families came to the attention of the seven-year-old nonprofit because of a child’s chronic school attendance problem.

But after working with struggling families in the North Side’s 18 neighborhoods, Rev. Gregg said she and her staff know better than most that it’s rarely just about a child’s struggle to get to school.

“We realize there are other things leading up to that attendance issue,” she said. “Maybe it’s a deeper family issue. Maybe it’s a kid on drugs. Maybe it’s a kid who is not getting clean and they’re getting bullied at school. Maybe they’re caring for a sick parent.” 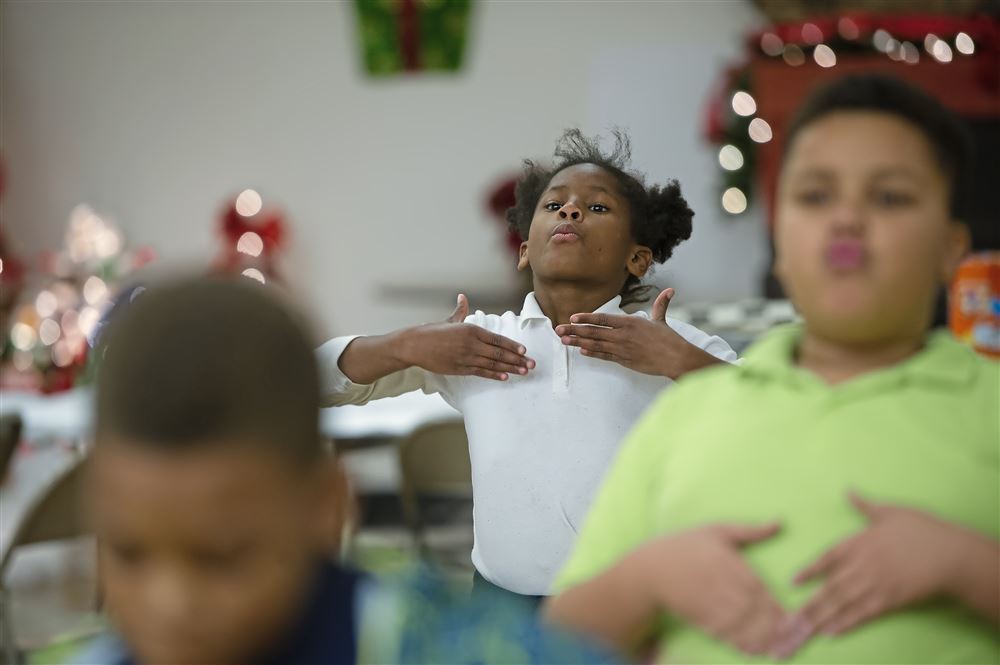 Ne’Omi Young, 7, does Akido, a Chinese practice of inner peace, with other kids in the Project Destiny after school program.
(Rebecca Droke/Post-Gazette)

“The attendance problem just starts our work,” she said.

Their work is about to grow considerably.

Project Destiny is the focal point of an effort to improve the health of the 41,000 North Siders who could use the most help by addressing their needs holistically: Not just any illness they might have, but by also directing them to resources to help with economic problems, food, transportation, as well as educational or housing needs, and anything else that is preventing them from staying healthy.

The organization and a coalition of Pittsburgh nonprofits recently won a $250,000 grant — with $500,000 in local matching funds — from the BUILD Health Challenge that awards money nationally to groups that have bonded together to improve the health of a community. BUILD is a Bethesda, Md.-based organization funded by health foundations and companies seeking to spur innovation.

Project Destiny is working with the Buhl Foundation (which is contributing $250,000), Highmark Health (which also contributed $250,000), Allegheny General Hospital and the Allegheny County Health Department to put into action the “inclusive health” philosophy of trying to address all facets of a person’s situation.

“What makes this so different is you already have awesome things happening — with social issues, like Project Destiny, and things with health issues, like the Center for Inclusion Health at AGH — and this brings those two together,” said Diana Bucco, president of the Buhl Foundation.

Much of the money will be spent hiring two full-time managers at Project Destiny who will oversee up to eight new part-time community health workers who will be responsible for knocking on doors in North Side neighborhoods and finding those people and families who need help.

Rev. Gregg, who spent 38 years as an administrator at Children’s Hospital, said she hopes to get people who already live on the North Side for these jobs, “people who residents already feel comfortable with,” so they can get that granular information about what it is that is impacting a person or family’s health, and direct them to resources.

For the two years of the grant, those door-knockers will track down and find those residents they can help, and learn as much about them as possible. They will feed that information back into a database that will be used to help isolate what “social determinants of health” are most in demand.

Then, the coalition wants to build the Center for Lifting EveryBody Up (CLUB), a health and wellness center to be located somewhere on the North Side. Exactly what the CLUB will contain will be determined by what Project Destiny’s door-knockers find is needed.

“At the CLUB, we want to be able to show people: I know your life is hard. Here is how we can make it better,” Ms. Bucco said.

As they do the work of gathering data, the door-knockers will all be trained to do the work that Project Destiny has been doing for the last seven years: Acting as a source of knowledge about where people can get help.

“What we really want is to develop ‘warm handoffs’ from the community workers to the agencies that can help them,” said Annette Fetchko, regional manager for the Center for Inclusion Health at AGH.

Patrick Perri, medical director for the Center for Inclusion Health, who recently co-authored a paper about the benefits of an inclusion approach, said what he and others in the field have found is that the best method is to have multiple warm handoffs.

“These are complex interventions and they can require multiple avenues to solve problems with housing, education, primary care health access and other areas,” he said. 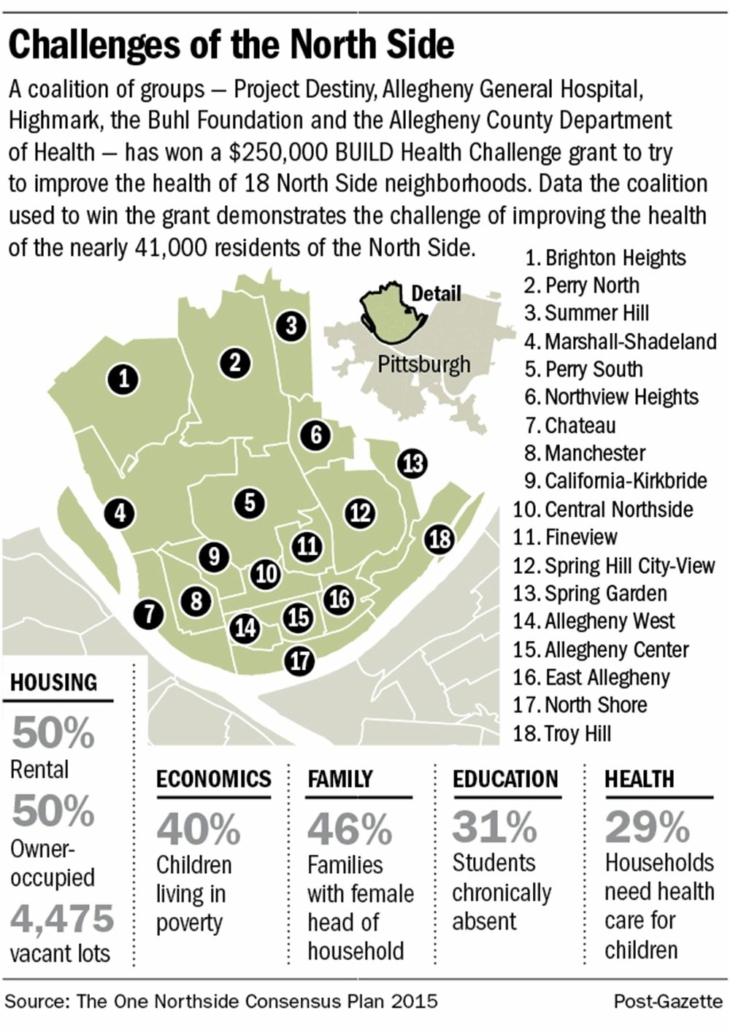 SOURCE: The One Northside Consensus Plan 2015

He particularly likes how Project Destiny uses community health workers to reach out.

“The community health worker model is one of the best ways to engage people who are either geographically or socially isolated,” he said. “And hopefully the BUILD grant will succeed where others have fallen short.”

Winning the BUILD grant pulled together three efforts that had been operating independently of each other until they had a reason to work in concert.

In 2013, about three years after Project Destiny began its work on the North Side with after-school programs and assistance to families, the Buhl Foundation made a decision to refocus a larger share of its annual giving to the North Side — where the foundation’s late namesake, Henry Buhl Jr., had his department store that was the source of his fortune.

That led to creation of the One Northside organization, which surveyed thousands of residents to find out what they believed they needed to improve their neighborhoods, and their lives.

The foundation then had also begun providing some funding for one of Project Destiny’s after-school programs, and pulled Rev. Gregg into the One Northside organization as chair of its early childhood initiative.

At about the same time, Karen Hacker, director of the county health department, learned about the BUILD grant. She initially worked with AGH and a different organization on the North Side, as well as groups in Homewood, to apply during the first series of grant proposals, but they were not successful.

She wanted to try again and when the second round of grants came up, she asked AGH and Buhl, which then turned to Project Destiny to work with them, and they won.

“One Northside was already trying to improve the overall health of that community, which is more than making sure that any one person gets their diabetes checked on,” she said.

Along with Project Destiny “they were uniquely positioned to take advantage of this grant.” 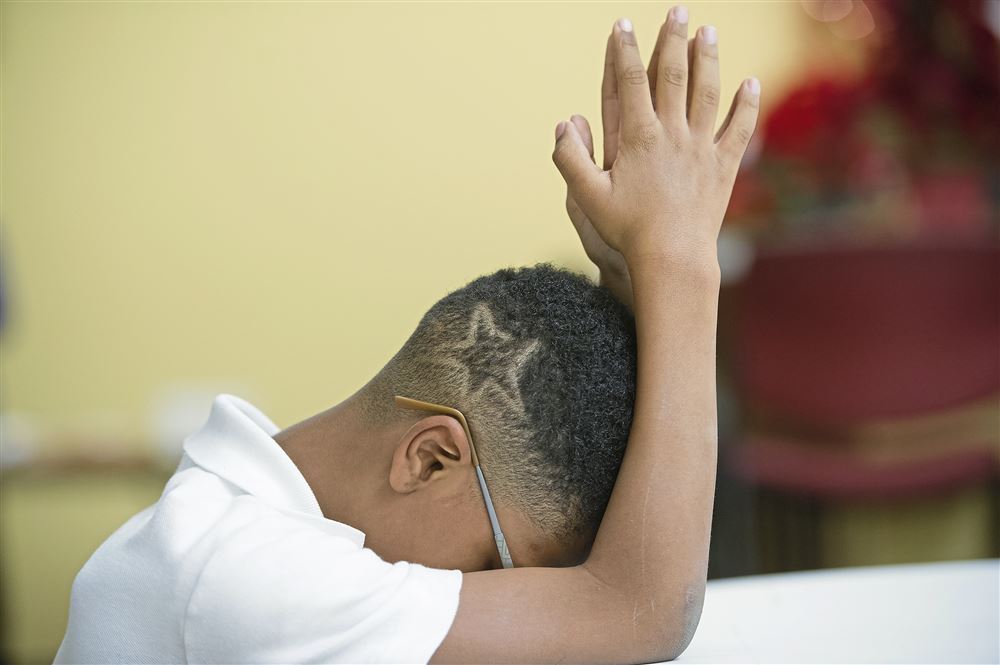 Ni’Kai Phillips, 7, bows his head in prayer before dinner at the Project Destiny after school program Tuesday, Nov. 14, 2017, on the North Side.

If the project proves successful, she said, she hopes it can be replicated in other communities, teaming a foundation, with a neighborhood group and a hospital, to address the complex issues that can lead to poor health.

“To me, watching how this [North Side project] unfolds will be telling,” she said. “If it works, others will want to replicate it.”