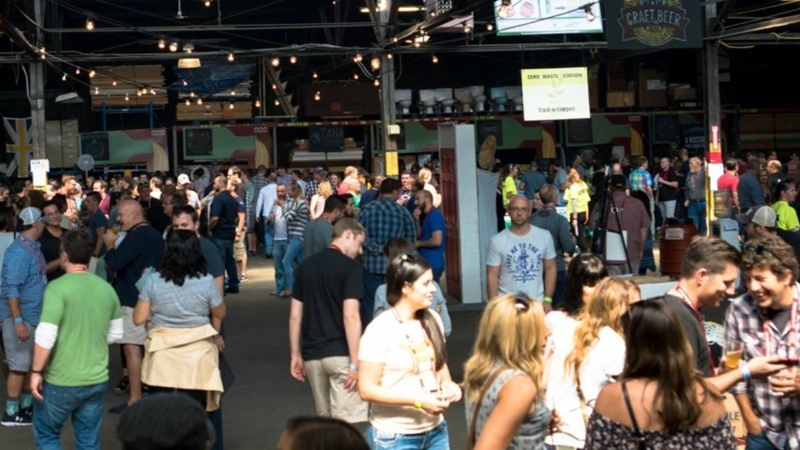 Every year, I resolve to waste less than I wasted the year before, but wasting nothing is almost impossible. It’s an ideal to strive for.

The Pennsylvania Resources Council recently honored organizations that took the zero-waste challenge in 2017, diverting from landfills 60 to 98 percent of garbage from events they held.

These organizations “have gone above and beyond recycling,” said Teresa Bradley, PRC’s zero-waste coordinator.

The Pittsburgh Marathon and the Great Race are two huge achievements of waste diversion in the city -— both more than 90 percent -— but the Beaver County Maple Syrup Festival, an event that pulled in 40,000 people last year — as many as the marathon — outdid both big races by diverting 98 percent of its waste.

The only items thrown away were plastic forks and bathroom waste paper, said Holly Vogt, director of Beaver County’s Department of Waste Management, adding that this year’s event will feature compostable forks.

“It was many hands on board: Boy Scouts, people doing community service, people from the Conservation District. We sort everything before it goes into a bin — a cardboard bin, a commingle bin, a food-compost bin.

“We switched out [individual] coffee creamers for cartons that are recyclable,” she said. “Instead of individual butter servings, we did pats from wax wrappers, which are recyclable.”

Food not eaten was donated to an after-school program in Beaver Falls. And the maple syrup is sold in recyclable jugs.

PRC worked 40 zero-waste events in 2017, including Construction Junction’s Steel City Big Pour beer festival and the Deutschtown Music Festival. It honored both for diverting between 75 and 89 percent of their waste.

It also honored efforts it didn’t play a part in. The Maple Syrup Festival was one that went it alone, as did the U.S. Postal Service in its commitment to divert 3,000 tons of material in Pennsylvania.

A grant from the Buhl Foundation helped pay for the zero-waste efforts of the Deutschtown Music Festival.

The annual event started in 2013 with 40 bands at a dozen venues in one day and grew by 2016 to 80 bands at 24 venues over two days. Last year, with 200 bands at 30 venues and thousands more people moving through the North Side, the organizers accepted PRC’s Zero Waste team’s offer of help.

“It was an education in diverting trash,” said Cody Walters, the festival founder. “We’ve always been good about recycling, but they added composting. They were sorting on site during the festival.

“We’re really happy with the results,” he said.

“It’s strange to get excited about trash, but we are because events like ours are an example,” Mr. Walters said.

The biggest “like” the festival gets on social media is the photo of clean streets the morning after, he said.

PRC helped organizations divert 46 tons of waste in 2017, from events and from waste audits, Ms. Bradley said. It contracts with commercial composters to take things that are no-nos in backyard compost, such as meat and grease.

Construction Junction, a local pioneer in the diversion of waste from landfill — it accepts used building materials for affordable resale — began striving for zero waste at its Steel City Big Pour fundraiser seven years ago.

Every September since 2007, Big Pour attracts between 3,500 and 3,600 people. Like the Deutschtown Music Festival in July, its has doubled and tripled in scale — from 20 breweries and seven restaurants to 52 breweries and 24 restaurants.

Instead of garbage cans, signs explain why there are none. Veterans of the Big Pour know the drill: You hand your plate and its waste to the people managing the waste.

The handing-off subtly implies your plate with its uneaten food and fork has value. Someone wants to take it, to sort the contents to get the most return on recycling and composting. That message soaking into someone’s consciousness is value added.

Inching toward zero waste takes intention, time and cooperation, “but there’s a lot of pride in it,” Ms. Vogt said of the Maple Syrup Festival’s efforts. “Everybody is in a good mood. It’s a great opportunity to engage, and we are gearing up to do it again this year,” the first weekend in April.

“When you see others do it, it makes you want to get on board, and that creates a movement.”

An East Ohio Street that draws Steelers, Pirates fans? Some see it, others just...
Scroll to top